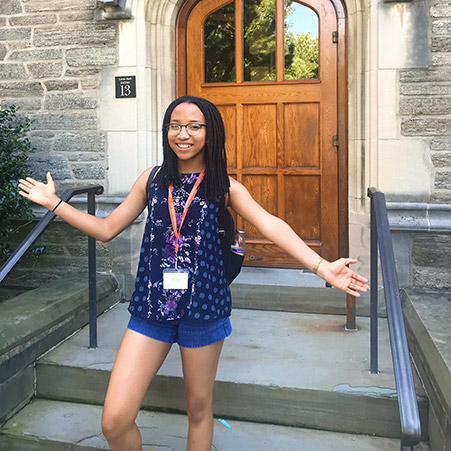 Danielle, born to Jamaican parents, was living in  Florida City when she was referred to Branches at age 8. Life was challenging but Danielle started attending Summer Shade Camp, as well as the Grow after-school program and began to thrive academically. Danielle’s mother began volunteering at Branches Florida City when she was not in school herself, and has now been employed at Branches for over six years as a Program Assistant. Danielle, who sings like an angel and performs weekly in her church choir, was also carefully selected and hired by Branches to work as a Summer Guide (youth counselor) for Summer Shade Camp. During her first Summer Shade, Danielle was promoted to a leadership role and was placed in charge of planning and executing the morning opening ‘Fiesta’ and closing celebration, which involves engaging over 150 students. Danielle greeted her team members and the children every day with a genuine smile and hugs; a true role model.

In the summer of 2017, Danielle spent 6 weeks in Seoul Korea through the National Security Language Initiative for Youth which she says was simply an unforgettable experience. During the summer of 2018, Danielle was accepted into the highly competitive LEDA Leadership Summer Institute and spent several weeks participating in this wonderful program at Princeton University. Upon her return, Danielle shared with Branches staff that her LEDA summer was one of the most transformative experiences of her life and thanked Branches for getting her to where she is today. Danielle graduated from the IB Magnet Program at Coral Reef High School in 2019 and is currently a Junior at Yale University. Go Danielle!

‹ Back to all Stories